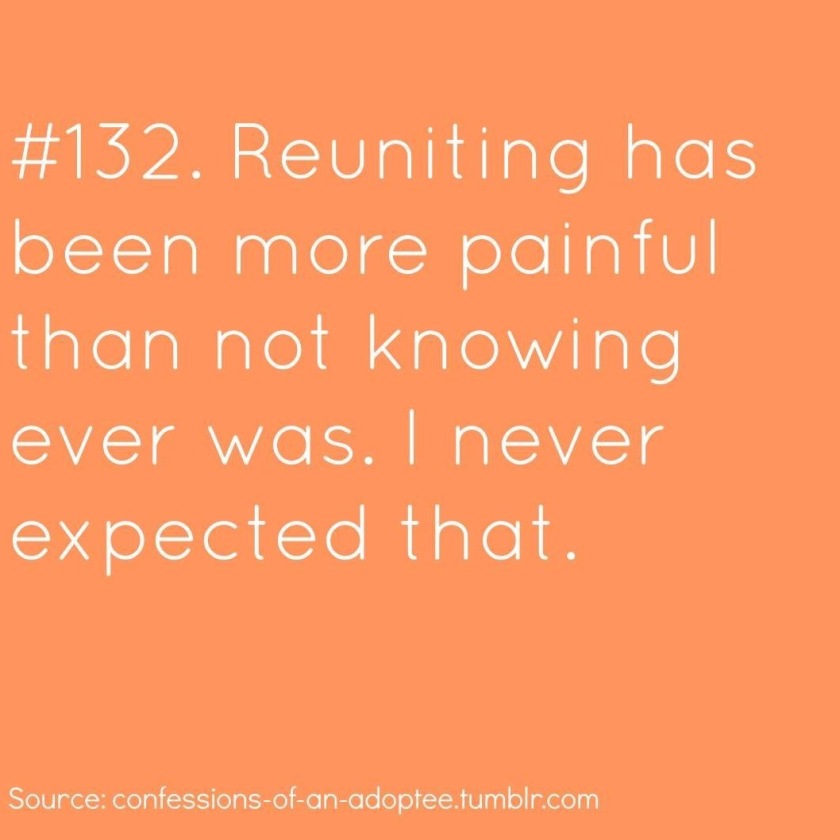 I guess I had this crazy vision of how things were going to go when I found my birth families, was I ever wrong! And to start this off right, I do realize that they are my “birth-parents” and we are only “half-siblings”, but that is a lot of typing to have to do, so I am just going to call it like I see it.  They are my mother, father, brothers and sister, even if they wished they weren’t!

I explained before that both of my parents have passed away and through a lot of searching and DNA testing, I have found my sister, from my mother’s side, and 2 brothers, from my father’s side. My sister has been fairly open to talking to me. Although in the beginning, in our very first conversation, she asked me if I was going to sue her? For what, what would I sue her for? She also refuses to ask our uncle any questions that would involve the timeline of our mother’s pregnancy with me. She says “I would not want him to think poorly of my mom for having had you”. Way to make me feel special there sis! But she is still willing to communicate with me when I reach out to her.

And then there are my brothers. I haven’t spoken to either of them, they won’t talk to  me. I have only spoken to my one brothers wife through emails. She claims he reads my messages that I send and that he is “right by her side” each time she responds to me. Says she forwards my messages to my other brother as well. Tells me it is going to take time for them, that I have to realize the images they had of their father, who attended mass everyday, have been distorted drastically. I get it, I would be surprised too if I found out my father had been unfaithful to my mother, but don’t look at me as though I am the one who did it.

I don’t know, I guess I just can’t imagine not wanting to get to know one another? I mean I do not understand how there is no interest in who I am? What my life is like? Am I married, how many children do I have etc..  I want to know all of that about each of them. I want to see photos of them growing up, I want to see what their children, my nephews, look like! I want to know if we like any of the same things, have the same allergies, maybe we have the same smiles? Why don’t they want to know any of that?

Yes, I feel rejected and hurt. I just don’t understand is all. I give up on the hopes of “one day” after I have “given them their time”. Believe me, I wish I could take it all back, for all our sakes. I wish I had never found them, I wish I had never reached out. And in an attempt to make myself feel better, how’s this for some defensive self-preservation talk…  “It’s their loss if they don’t want to know me” or “Fine, don’t talk to me……I don’t want to talk to you either”. I just never would have thought it would hurt worse to have found them, than to have never known anything about them.